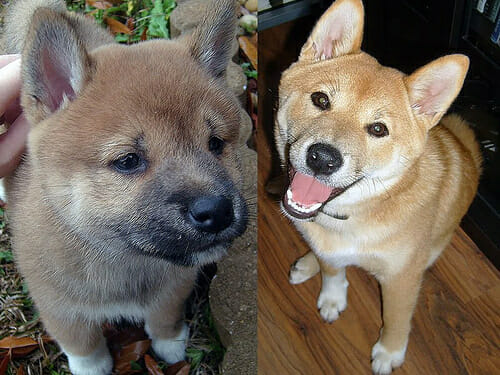 On the left is Okami the day he went to his new home and on the right is Okami at 6 months old. Notice the difference?

Shiba Inus come in three colors, red, red sesame, and black and tan.  These are the 3 colors that are eligible to compete in AKC sanctioned shows.  Cream Shibas can be registered with the AKC but are ineligible to be shown because it is seen as such a serious fault.  For this reason, serious breeders that are showing champion dogs do not get cream Shibas.  Reputable Shiba Inu breeders are always breeding to advance the breed within the guidelines set forth by the AKC as well as the Nippo guidelines in Japan.  This ensures that only healthy, sturdy, and sound Shiba Inu puppies are being raised.

When a puppy is born it looks very different than it will as an adult.  This is where experienced Shiba Inu breeders are a necessity in order to let you know what the puppy will look like as an adult.  Around six months old is when a Shiba Inu will look as it will as an adult.  There may be slight changes until it reaches adulthood at a year old, but at 6 months it is looking pretty much the way it is going to look as an adult.  Shiba Inu puppies are born with a lot of black in their coats.  Obviously, if it is a black and tan, the black will remain.  However, their markings on their chest and face will change some.  As for reds and red sesames, an experienced Shiba breeder will be able to tell you if it will be red or red sesame.  Also, as the puppy grows the white on its chest will blend in so there is not such a distinct line separating the white from the color.  Some puppies don’t have much white on their chest when born but it will come in as it gets older.  Most puppies are born with black muzzles and black around their necks and legs.  This will all go away by the time they are 6 months old.  On a red it may all go away or there may remain some black “ticking”, often a little bit of black on the tip of the tail or feathering the hair along the spine, however this is seen only up close and the Shiba still looks red.  The breeder should be able to tell you if there is going to be black ticking or not.  A red sesame is going to have some black throughout its coat giving it a peppery look.  Red sesames are less common, as are black and tans, and therefore more desirable to some people.

Your Shiba puppy will undergo other changes to its appearance as well.  They are born with their tails hanging long and their ears drooping.  By the time a puppy is full grown its ears will be sticking straight up and its tail will be curled up.  However, when meeting your puppy for the first time do not be alarmed if its tail is down.  A Shiba Inu will only put his tail up if he feels completely comfortable and often Shibas are wary of strangers.  A puppy’s face also looks a little “scrunched” when they are young.  Rest assured that your Shiba won’t look like a pug when you get it!

When choosing among Shiba Inu puppies for sale, trust in your breeder’s experience to tell you how the puppy will look as an adult.  The breeder knows how their puppies turn out since they should be breeding to find show prospects for themselves and can let you know how the puppy’s coloring will turn out.  It is not uncommon for two Shibas to look completely different as puppies and both turn out to be the same striking red.  Quality Shiba Inu breeders can tell what is simply part of the puppy coat and what is going to stick.